In preparation for looms to be added to the art area on the Pre-K playground, we started practicing with them in the Studio!

Friends made predictions about what they thought a loom was…

Cathy: A tiger, because it has black stripes.

Mae: Is it a musical instrument that doesn’t make a song?

Miguel: If you pull on one string and it hits another string it might make a sound.  Is it a string xylophone?

Adrian: Is it called scaffolding?

William: A net to catch tigers.

Luke: I remember from last year we used it, is it called a baloom?

Greyson: I’m using my eagle eyes, but I still don’t know what it is!

Nneka: I heard about weaving in Africa! 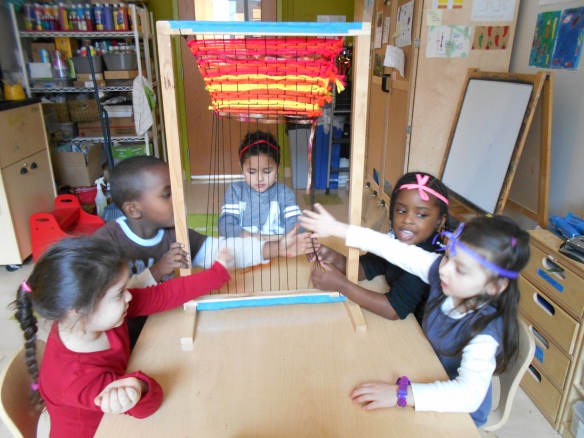 And what it could be used for…

Mae: I want to know, can we weave underwear?

Ra’Maya: Can we weave pajamas?

Iris: Could you make it into a coaster?

Miguel: Could I make a little shirt for my little sister?

Destynee: Blankets for the doll baby.

Before friends began weaving on the classroom loom, children used small paper looms to learn the technique.  Friends used skinny strips of paper and wove them over and under the slits in the paper loom, which created a pattern. 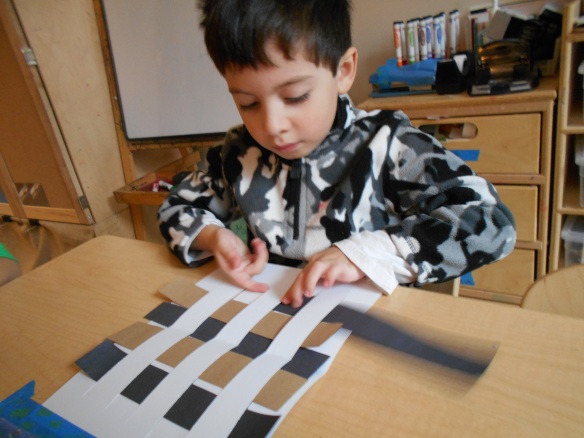 Naomi: It’s like a spiders web that’s so colorful.

After practicing on paper looms, friends began weaving on the classroom loom! 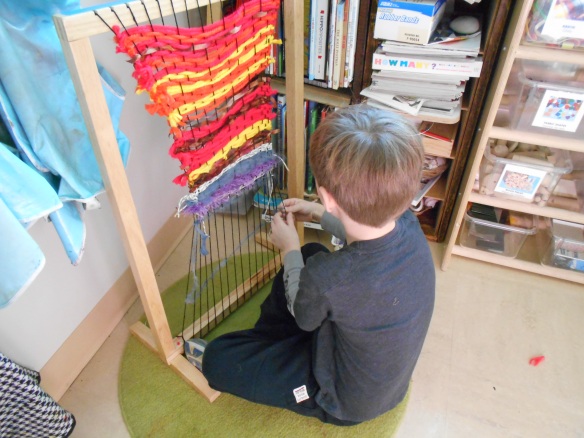 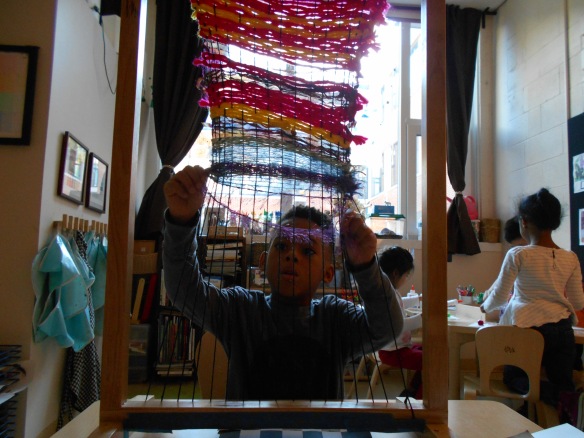 We can’t wait to start weaving on the playground next week!

6 days until our Spider Showcase! The first half of this video is from week one when children were working on spider web Gelli prints.  The second half of the video is of friends stamping their hand carved spider stamps from Styrofoam!  Make sure to stop by the Studio next Wednesday to see all of their work around spiders!

Over the last couple weeks, friends have been learning how to weave in the Studio!  Children began by practicing on paper looms before putting their new skills to the test on the big classroom loom.

What is a loom?

Daniel: It looks like a guitar.  Or a spider web.

Amaya: Is it a hula skirt?

Justin: Is it a web?  It looks like your fingers are swinging through a vine!

Florentina: Is it a door?

Zuri: It’s a loom, I remember it from last year.

Abdoulaye: It’s a guitar, or a cello.

Kofi: I know how it works.  There are cuts in the paper and the paper zig zags through it.  It looks like a chess board.

Children that had experience with the loom last year really stepped up as leaders and helped teach their new friends how to weave!

Asiah: It’s soft and the yarn makes a pattern.

Today, Thursday art groups began learning about printmaking!  This week, we focused on mono-printing with plexiglass, tempera paint and brayers.  Children loved smoothing out the paint with the brayer and transferring the image to paper.  Friends worked together on larger mono-prints and enjoyed sharing what they saw with their peers.

We began by exploring some new materials (plexiglass and brayera) and friends made predictions about what they thought they were and could be used for.

Georgi: The plexiglass resists the paint… it wont go through.

Wallace: Maybe we can work together to mix the colors.

Ezekiel: Georgi, can I help you, too?

Ezekiel: Can I make the water and a boat?

Wallace: Yes, let’s do it together!

Ezekiel: Can we make rainbow water?

Edwin: I can’t wait to see it guys!

Wallace: Hey, when you’re done, can you put the paper down and scrub with two rollers?

Wallace: Wow, I love yours so much.

Ezekiel: How about mine?

Wallace: I love them all, we did them together!

Michael: Is it a light table screen?  Wait, I can see myself, it’s a reflection.  The paint came off on the paper from the scream.  I mean screen.  It’s so cool and amazing… it looks like a tiger!  I’m going to write N and Y to say New York because that’s how you spell it.

Cole: All the paints on the paper.  It looks different on the paper.  It changes, see… since you rolled so much!  Look what happened!  This is a field of feathers and a sea of chocolate milk.  Do you know what this one will be?  Let me take a little peak.

Yahoo! I finally figured out how to upload videos to the blog! This is a short video of Demetrius finishing up his portion of the group weaving on the classroom loom. Since the loom has been introduced, Demetrius has used it every day after he’s finished with his other work and has loved sharing his new skills with his friends. Enjoy!

Friends have really enjoyed learning about the loom and are excited that it will now be a permanent center in the Studio!  About half of Pre-K has used the loom in the first week, and the weaving is becoming more and more beautiful by the day.  Check out the progress over the last week!

Demetrius: Whoa, cool… it’s gone!  The string is gone!  There is it, wait, I can’t find it… there it is, surprise!

Nayahris: It’s so pretty, and beautiful.  It’s like a rainbow.

Today was the first day that friends were able to work on the new classroom loom!  We began by looking at the loom and making guesses about what we thought the new object in the Studio was.

Paris: It feels like a carpet.  Or a blanket.

Next, children practiced weaving on paper looms to get their fingers warmed up… over, under, over, under!  Many friends made patterns on their paper loom and some noticed that they started to look like checker boards.

Once children had finished practicing on the paper looms, they worked individually on the classroom loom.  Friends enjoyed selecting colors of yarn and showing their peers what they created.  Throughout November, all children in Pre-K will have a chance to use the loom as it’s now going to be a regular center in the Studio!

Jaslene weaving her magenta yarn through the loom!

Emmanuel and Samantha working together at the loom.

Last week, I posted about Minna and her jet made out of Beautiful Junk.  She had been working on it in her classroom and brought it to the Studio to make some additions.  On Wednesday, I was spending some time in Ms.Lauchlan’s room and sat with Minna, AJ and Jasmine as they were building with Beautiful Junk.  Everyone was engaged and excited about what they were building, as well as what their friends were creating.

Minna: Treasure, treasure, I putted two treasure.  The gengine (engine) starts rumbling and it goes and goes and then blast off, it disappears.  The orange bead was on the ground… I need it for the fire by the gengine.  This box is their room.  They can just go into the box to sleep and the driver will still fly the jet.  It’s the jet bedroom… by the dungeon.  Oh cool… a bell and a tiger button.  That’s just what the jet needs!  I got some cool things and some pretty things.

Jasmine: Can I watch what you’re doing?  It’s not my work but I like it.

Jasmine: What’s this bottle for?

Jasmine: I wish you had something in there that smells like perfume.  Minna, what’s this?

Minna: An alien from Mars.

Jasmine: Interesting yarn.  Minna, that button looks like a ring my mom had from when she wedded herself.

Minna: That’s cool.  Wait, I need to show you something.

Minna: And shiny! Jasmine, you and Ms.Cushner can always watch what I’m doing.  Whenever you want, just come over to watch and maybe help if I ask!